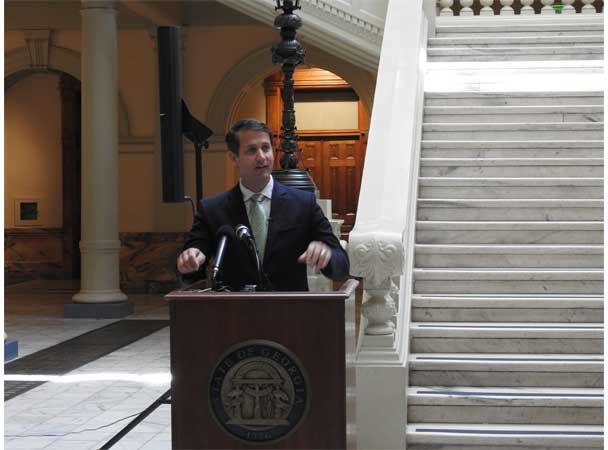 “The Die Has Been Cast”

Swing and a miss, strike two.  State Senator Michael Williams now has two strikes against him with the media in his quest to be the next Governor of Georgia.

Williams’ first strike was at the State GOP convention when he announced in a speech that a member from  Lt. Governor Casey Cagle’s campaign team approached him backstage and offered him a deal to get out of the Governor’s race.  In his speech at the GOP convention Williams claimed in front of 1500 people that he was offered the Chairmanship of the Appropriations Committee if he would get out of the race.  He never named the individual with Cagle’s team who made the offer in the backroom deal.  An accusation with no name leaving the media hanging. Strike one.

Williams sent out an invite last Wednesday announcing a press conference he would be holding at the Capitol Thursday afternoon. The invitation stated he would be revealing the reprehensible acts of Lt. Governor Casey Cagle.

The media pressed Williams to give the name of who from Cagle’s team offered him the chairmanship. Williams’ only response was, ‘not at this time.’  I asked him the final question of the press conference, “did you not say that it was a member of Cagle’s team?” Williams said, “correct.”  And I asked, “and you’re not prepared to give us who that is”?  Williams: “no”.  Williams then told everyone to have a nice day and walked off taking no more questions.

Senators Greg Kirk and Josh McKoon co-sponsored the bill along with Williams.  Williams claims that Cagle is the reason the bill went nowhere during the past legislative session.  Maybe Williams thought this would be his strongest campaign issue. This could show he is the true friend of law enforcement in the campaign.

In May Cagle announced along with Greg Kirk the Compensation of Police and Sheriffs Task Force.  Statement released by the Lt. Governor’s office, “The service and dedication of our law enforcement officials is nothing short of heroic,” said Lt. Governor Cagle. “We must make every effort to ensure local compensation packages are both competitive and fair to those who protect and serve. COPS will help local governments identify ways to maximize their support for the men and women who bravely protect our communities and neighborhoods.”

Kirk, one of Williams’ co-sponsors gone and with the other Josh McKoon running for Secretary of State he may not have any backup concerning his claim that Cagle killed the bill.

Recently Cagle commented about a possible sheriff deputy minimum wage.  He has not gone into any detail though.

This week is the Sheriffs’ Association’s Summer Conference where each candidate will get a chance to address the Association.

My suspicion is that the Sheriffs’ Association will support whomever they think will be best able to get something done for them when it comes to minimum wage for deputies.  If that turns out to be Cagle then that may mean  Williams has been totally out maneuvered on the issue and SB 254 could turn out to be, as a campaign issue for Williams, no more than good initiative/poor judgment.

You can understand Williams’ frustration.  If Cagle gets almost every Sheriff in the state to actively campaign for him that is big.  Really big.  Maybe that is the ‘reprehensible’ act.

But, Williams’ shoe tying comment directed toward Casey Cagle was a ‘low blow’ no pun intended.  Williams experienced several personal attacks especially during his first State Senate race.  The rumors are already flying and emails being sent concerning Williams’ past.  Maybe Williams’ comment was a subtle warning not to go personal.  It’s disappointing this early in the campaign that things are taking a dirty turn rather than  staying focused on the issues.

The voters of Georgia may want to hear about issues like casino gambling, rural economic development, tax reform, healthcare, infrastructure…… not who can tie their own shoes.

I feel Williams’ gets one more strike with the media.  I can only speak for myself.  If he calls another press conference I will attend. Williams has to make good on his claims of reprehensible acts by Cagle soon or that will be strike three and he will lose his credibility. It’s a long time until election day and Williams will need the media to take him serious to help get his message out.

Kemp and Hill have not commented on the Williams’ attacks of Casey Cagle.  They both seem to be able to keep their campaigns focused on the issues and not the dirt for the time being.  Odds are they will have to join the mud pit before the race is over.

Michael Williams was the first Georgia politician holding a state office to support Donald Trump for President.  Williams is attempting to run a Donald Trump-style campaign.  There’s only one problem, he is not Donald Trump.

Trump never held public office. He had no legislative voting track record.  He could run against Washington D.C. and the Media.

Williams has a State Senate voting record. During his first two years in the State Senate his voting record looks like he was working well with the Republican Establishment.  His third year looks more like someone preparing to run for governor.

I am not questioning Williams’ conservative credentials, just the direction his campaign is headed.  If you going to demand Casey Cagle  get out of the race, it’s time to give the reason why with the facts.