This morning the Rotary Club of Dawson County‘s Peace Pole was erected in front of the new pavilion at Veterans Memorial Park. The marble Peace Pole weighs approximately 7,000 pounds and says “May Peace Prevail on Earth” on each side in English, Cherokee, French and Spanish. 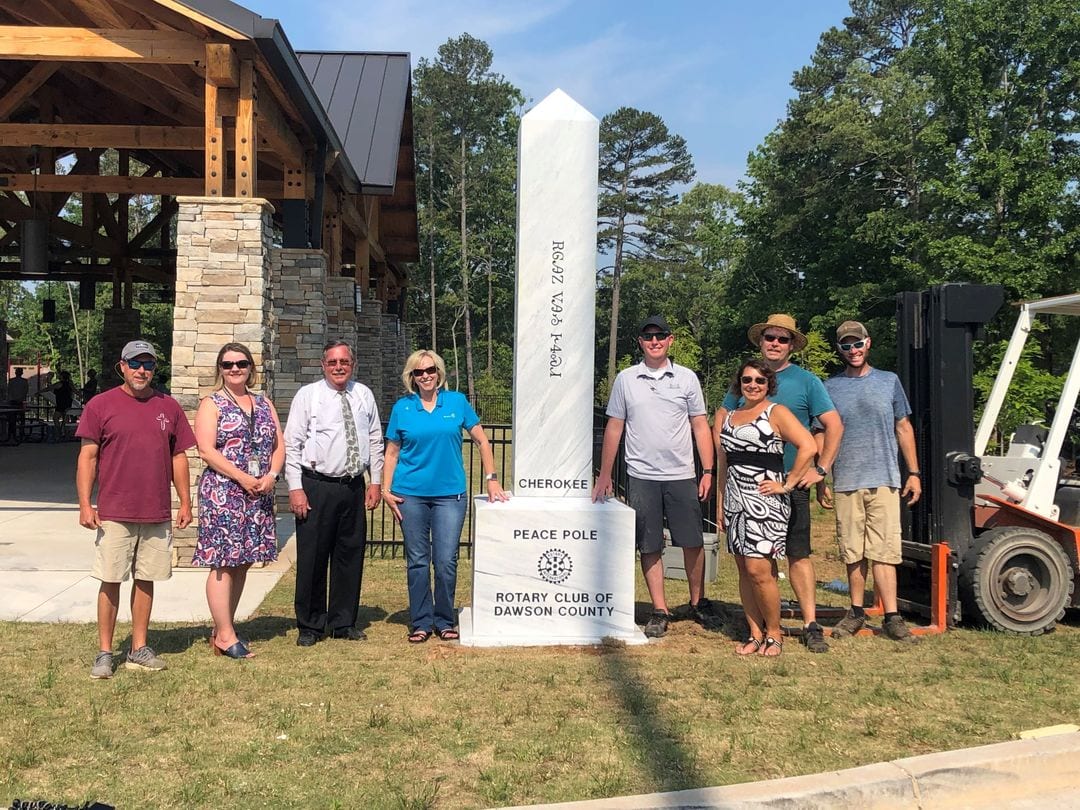 There will be a formal dedication of the Peace Pole at 7:30 a.m. Thursday, June 24. More details will be provided on the dedication once they have been finalized.
A little history and background on why a Peace Pole was installed at Veterans Memorial Park:
In April 2020 while Sharon Hall was attending the Rotary Club President Elect Training in Atlanta, she learned about the Peace Pole project. Immediately she was intrigued by the project not knowing what 2020 would bring to our world. She talked with and visited several Rotary Clubs that had already erected their Peace Poles – some were exceedingly small while others were big. The one she loved most was the one made from Georgia Marble. After presenting the project to her Board of Directors, the Rotary Club of Dawson County agreed it would be a great project.
Although Covid delayed the project, it was good because it allowed the Rotary Club to get marble instead of granite. Sharon said, “Today, getting the Peace Pole installed, is a day I will never forget. Our club sharing the message ‘May Peace Prevail on Earth’ will be there long after we have all gone.”
What is a Peace Pole and why should you plant one?
Peace Poles are planted with the Universal Peace Message “May Peace Prevail on Earth.” They symbolize our common wish for a World at Peace. They stand as a silent vigil for peace reminding us to think and act in the spirit of Peace. The Peace message is written in four different languages – one on each side of the Peace Pole.
Planting a Peace Pole is a way of bringing people together to inspire, awaken and uplift the human consciousness the world over. It is a wonderful project for any community, organization or your home. Peace Poles are now recognized as the most prominent international symbol and monument to peace. They remind us to think, speak and act in the spirit of peace and harmony. They stand as a silent visual for peace to prevail on earth.
The Peace Pole program had its beginnings in 1955. You can now find Peace Poles in nearly to 200 countries and more than 200,000 have been placed around the World. Our aim is to distribute 100 Peace Poles for 100 years of Rotary sponsored by 100 Rotary Clubs; each pole will be numbered 1 to 100.
Dawsonville Peace Pole Rotary Veterans Memorial Park 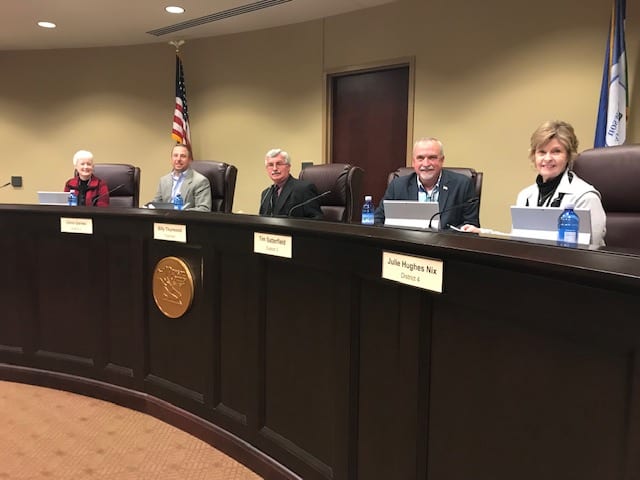 DAWSON COUNTY, Ga. – Public Works Director David McKee asked commissioners to approve a contract for major road improvements with Blount Construction in the amount of $4,051,052.72 at their next voting session in May.

The request came during the Board of Commissioners Thursday work session and included Sweetwater Juno, Bailey Waters and Hugh Stowers  roads. The projects were included in the voter-approved special purpose local option sales tax (SPLOST VI). Blount Construction presented the lowest of three bids. McKee said there is a need to complete full depth reclamation and paving on all three roads.

Due to the Executive Order issued by Governor Kemp on April 2, a pre-bid meeting was not held. Instead, an additional six business days were allotted for questions.

All work will take approximately 165 days to complete, weather permitting, and comes with a five-year warranty.

McKee also notified the Board there is a need to complete turn-key culvert renovations on four structures on Bailey Waters Road and Sweetwater Juno Road and he requested approval of the low bid of Townley Construction in the amount of $453,000 to complete those projects. The projects are also part of the voter-approved SPLOST VI.

Brooke Anderson appeared before the Board on behalf of the Rotary Club of Dawson County to request permission to install a granite Peace Pole near the current courthouse. The pole would have the words, “May Peace Prevail on Earth” written in different languages on each side. This reaches people from many cultures in the community or visiting the community.

Board of Elections and Registration Director Glenda Ferguson asked the Board to approve a SECURE THE VOTE/CARES GRANT request to purchase personal protection equipment (PPE) including masks, gloves, disinfectant/cleaning supplies, barriers, markers, etc. and a steel drop box for the county Elections Office in preparation for the June 9 General Primary/Presidential Preference Election.  The grant comes with a 90 percent reimbursement from the Secretary of State’s Office. Because Advanced Voting begins May 11, the items have already been ordered. Should the Board not approve the request, Ferguson said the items can be funded out of the Elections Office Budget.

The Board also heard a request by Emergency Services Director for the county to accept $4,316.35 in funding raised from the State of Georgia Super Speeder Law that went into effect in 2010. Fines collected under the law support the Georgia Trauma Commission statewide. 20% of these funds go to various EMS programs across the state and one of these programs is the Trauma Grant.

During the regular meeting that followed, the Board unanimously approved a contract with West Georgia Lighting in the amount of $217,000 for multipurpose LED field lighting at Veterans Memorial Park and the Peace Pole project presented during the work session.