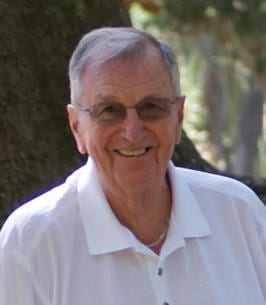 Henry Little, Sr., 89, of Dawsonville passed away Wednesday July 17, 2019 at Northside Forsyth Hospital.
Born January 9, 1930 in North Carolina, he had been a resident of Dawson County for the past 18 years having moved from Cleveland, Tennessee. A U.S. Air Force Veteran who served during the Korean Conflict, Henry was a member of Good Shepherd Lutheran Church in Gainesville. During his working life he traveled extensively as a commercial sales rep for City Service Oil Company. An avid and talented golfer, he affectionately earned the name “Ho Hum Henry” because his shots were so consistent his friends would joke that his golf game was boring. He also enjoyed gardening, bird watching, spending time at the beach but most of all his grandchildren. Henry was preceded in death by his beloved wife, Martha M. Little; parents, Lawrence and Belle Little; sisters, Ruby Peterson, Frankie Little; brother, John Little.
Surviving are his son and daughter in law, Hank and Danette Little of Dawsonville; grandchildren, Lee and Chelsea Little, Neal Little.
Memorial services will be held Saturday July 20, 2019 at 11 a.m. at Good Shepherd Lutheran Church in Gainesville with Pastor Zach Hoffman officiating.
Interment will be held in Catawba Memorial Park in Hickory, North Carolina.
In lieu of flowers the family requests donations be made in Henry’s honor and memory to Good Shepherd Lutheran Church, 600 South Enota Drive NE, Gainesville, GA 30501.
Condolences may be expressed at www.beardenfuneralhome.com.
Bearden Funeral Home, Dawsonville, GA.