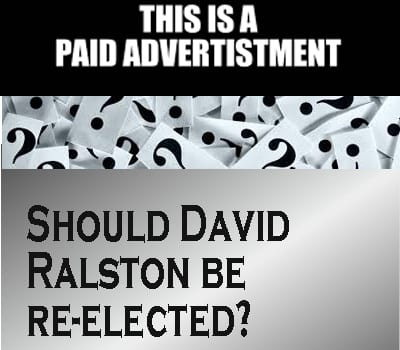 Mr. Ralston claims that he is the second most powerful legislator in Georgia!

How has that benefited the people in Gilmer, Fannin, and part of Dawson?

NO new businesses in the District with good paying jobs.

NO legislation passed that benefits District 7.

NO public meetings or newsletters informing us how proposed legislation affects us.

NO cuts in taxes, fees, or regulations.

YES – lobbied for the largest TAX increase in the history of GA adding approximately 26 cents a gallon to fuel tax!!

YES – prevented legislation from coming to the floor for a vote that WOULD HAVE made it MANDATORY to report ILLEGAL immigrant criminals incarcerated in GA prisons, to ICE for deportation!  – WHY DID HE PREVENT THAT???

YES – failed to introduce or support legislation to remove the 30% penalty imposed to get the old T-SPLOST passed.

When T-SPLOST failed those counties that voted against it had their matching funds for road and bridge work increase from 10% to 30% creating a SIGNIFICANT BURDEN to your county.

YES – we were promised elimination of State Income TAX which is 6%.

Under his governance, every bill to provide a planned reduction to zero has failed.

All you finally got was a reduction of ¼ of one percent.

Fannin County (Atlanta CDC) ranks #2 in the state for opioid overdose and suicide in the 10-17 age group.  Gilmer ranks in the top 40.

Ralston offers rhetoric but NO solutions for distraught families.

Could it be that campaign contributions from the insurance and medical industry matter more to him?

Your representative could have introduced a bill requiring GA to comply with the Federal law which requires mental health benefits to equal other medical coverage.  Such legislation would significantly help those struggling with mental illness and opioid addiction.  But is opposed by big insurance companies.

Where are these? Are any of the photo-ops you see for ribbon cuttings in Georgia located here in our District?  NO.

He takes pride that we are the #1 state for business.  If so, where are these high tech and manufacturing companies locating?  NOT HERE!

As Ralston meets the decision makers looking for a location why isn’t he proud of his ‘home’ and bring some of these companies to North Georgia and encouraging businesses that would provide jobs for our young people.

LOCAL ABSENCE:   Where is your Representative????

DOESN’T host Town Hall meetings with time for Q & A?

Too busy with his “legislative duties”? ?  NO excuse.

DIDN’T tell you HB769 would prevent us from having a local hospital, indefinitely!

DIDN’T tell you DOT will be closing 2 lanes on 515 north of Ellijay for 2 years!

The fuel tax passed under his watch two years ago creating the largest TAX increase in the history of GA sends an additional Billion Dollars a year to the DOT.

Before this Bill county vehicles were exempt. This TAX is an extra burden on county budgets, YOUR taxes.

And last but not least, Ralston seems to have no respect for the law.

GEORGIA income taxes.  What would have happened if YOU did that?

As a lawyer he knows the law.  Finally paid them when he ran for office!

Has repeatedly filed continuances for as long as 9 years preventing some clients from even getting a trial date.

DOES THIS SOUND LIKE SOMEONE YOU WANT REPRESENTING YOU?