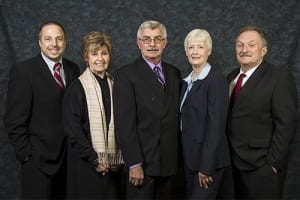 DAWSONVILLE, Ga. – In a rare occurrence Thursday, the Dawson County Board of Commissioners reversed a decision by Planning and Development Director Jason Streetman to grant a setback variance for a convenience store located at the intersection of Hwy. 53 and War Hill Park Road.

Business owner Dipikaben Patel requested a 10-foot front setback variance along Hwy. 53 and a five-foot side variance along War Hill Road to allow the construction of a gas tank canopy. Streetman granted the variance, but several area residents spoke in opposition to the variance at the appeal during Thursday’s meeting and Commissioners Jimmy Hamby, Julie Nix and Sharon Fausett voted to deny it.

Hamby questioned why the owner couldn’t extend a canopy closer to the store rather than the right of way. An engineer speaking on behalf of the owner said it would be impractical since it would limit available parking space.

Speaking in opposition to the variance, Brandon Bennett said, “We do not need to have a traffic burden added to this dangerous intersection.” Bennett said the only way into the parcel is off Hwy. 53 and the only way out is onto War Hill Park Road. “We do not need a tractor trailer (carrying fuel) having to turn around at War Hill when the federal government won’t even let a fuel truck come down War Hill Road to fuel a helicopter for the Rangers.”

Also, commissioners approved a request by Brodie Allred, speaking on behalf of Norkot Financial, Inc. to rezone 46.73 acres on Moss Road from Residential Agriculture (RA) to Residential Sub-Rural (RSR) for a 30-lot single-family residential community. The vote was 3-1 with Fausett opposed.

The board took no action on several requests by residents of the Gold Creek community to have their property annexed into the city of Dawsonville, leaving the decision in the hands of the city, which is scheduled to hear the requests during the March meeting.

Commissioners unanimously approved a contract with SEI, Inc. to design the Blacks Mill Bridge replacement at a cost of $33,700 and the appointment of Angelia Brown to the Avita Community Partners.