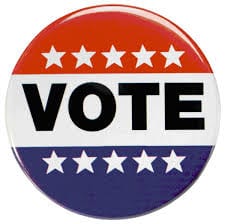 DAWSON COUNTY, Ga. – For months Republican and Democrat candidates up and down the ballot have spoken loudly about their campaigns. Starting today (Oct. 12) the voters in Georgia begin to speak when Advanced Voting begins.

Advanced voting will continue Monday through Friday from 8 a.m. until 5 p.m. until Oct.30. Voters wishing to vote on Saturday may do so on Oct, 24 from 9 a.m. 4 p.m. All Saturday and advanced voting will take place at the Dawson County Elections and Voter Registration Office, 96 Academy Avenue.

There is also an official absentee ballot drop box where voters can drop off absentee ballot applications and/or ballots without leaving their cars. The red drop box is located outside the Elections Office and is properly labeled and video monitored.

Election Day is Nov. 3 when all Dawson County precincts will be open from 7 a.m. until 7 p.m.

The following is the official ballot:

For President of the United States

For United States Senate (To Fill the Unexpired Term of Johnny Isakson, Resigned)

For U.S. Representative in 117th Congress From the 9th Congressional District of Georgia