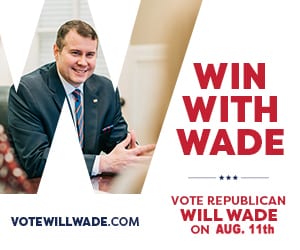 (Dawsonville, GA) Will Wade, Republican candidate for State House, announced a plan today to
completely eliminate retirement taxes on veterans and allow military training credentials to be
applied to some essential medical professions.

Currently, 30 states have no taxes on military retirement benefits. Georgia is one of 13 states
with special provisions or other considerations for taxes on retirement pay. Wade’s plan would
completely eliminate these special provisions, giving Georgia veterans a clearer financial future.
“It’s time for Georgia to step up to the plate and get this done. The impact on our state budget
will be minimal. In the long run I believe this would help attract more veterans to our state be an
economic driver for our economy. We are lucky to have so many active duty military members
here already, let’s make sure they want to stay once their service has concluded,” Wade stated.

Wade’s second proposal comes as a response to nationwide shortages of doctors, nurses, and first
responders during the COVID-19 pandemic. Currently, members of the military who have
received special training as combat medics, paramedics, and other medical professionals are
required to be retrained in order to work in those same professions in Georgia. Wade’s plan
would make sure that training is applied appropriately once their military service has concluded.

Wade said, “If you can perform as a combat medic under fire, there’s no reason you can’t
perform as a paramedic or EMT in Dawsonville or Dahlonega. Let’s make it as easy as possible
for our military members to transition from their military career to a successful career as a
civilian. This is just common sense.”