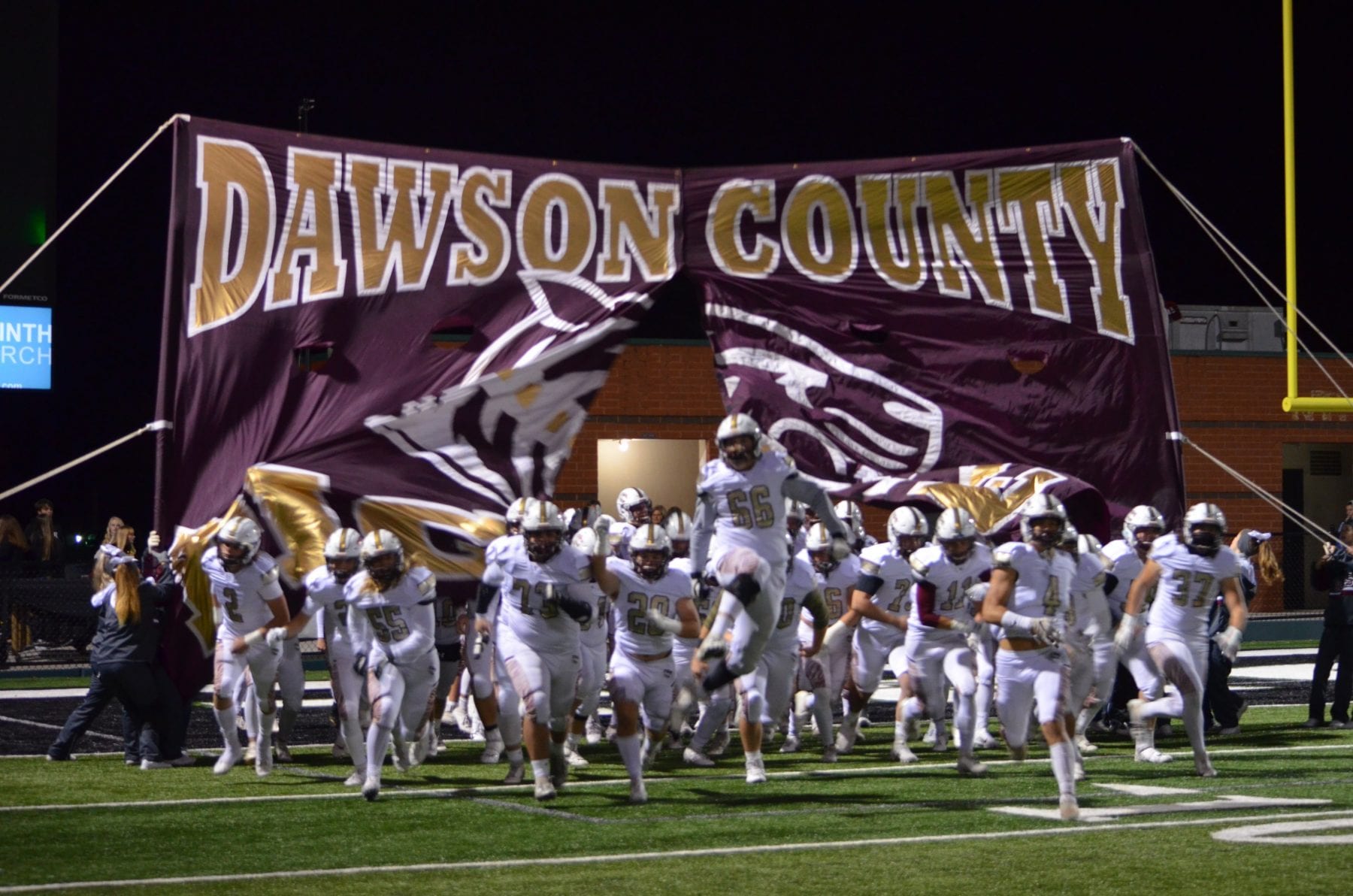 If you didn’t know going into the game that there was extra motivation for the teams, you could certainly feel it when you walked in.

On North Hall’s senior night, they played host to Dawson County. The winner would claim the 2-seed for the region in the state tournament and get to host their first playoff game.

To open the game, #21 Shawn Thomas returned the ball for the Tigers to midfield. After multiple first down runs, #10 Zach Holtzclaw fired a 28 yard touchdown to #12 Riley Herndon, giving Dawson the early 7-0 lead.

The Trojans responded by marching the ball down the field quickly. They scored on a 42 yard touchdown run to tie the game less than 4 minutes in. 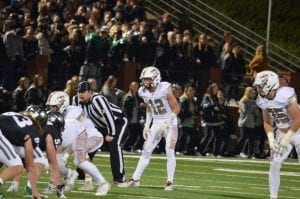 Holtzclaw kept their offense moving by hitting #1 Dakohta Sonnichsen for a 43 yard pass. He followed that by finding Sonnichsen again for a 19 yard touchdown to regain the lead.

North Hall kept the offense moving with a couple first downs, but eventually had to punt and downed the ball at the 2 yard line.

The Tigers got a first down, but couldn’t get much more and had to punt themselves. The defense held strong and forced a 3 and out, but the punt was bobbled after the fair catch. The Trojans recovered the ball with the great field position.

Dawson’s defense held the Trojans in check by forcing another 3 and out, thanks to a big tackle for loss by Herndon. Herndon wasn’t done as he blocked North Hall’s field goal attempt. However, the Trojans were able to down the ball at the 1 yard line, giving the Tigers poor field position yet again.

Unfortunately, Dawson wasn’t able to move the ball this time, resulting in a safety. The defense forced a quick 3 and out, preventing North Hall from capitalizing on the turnover.

On the ensuing possession, Holtzclaw hit Sonnichsen with a 39 yard pass to cross midfield. The victory was short lived, however, as Holtzclaw’s next pass was intercepted and returned for a touchdown. Halfway through the second quarter, North Hall led 16-14.

The Trojans’ defense kept the momentum going by sacking Holtzclaw for a big loss. The Tigers were able to turn the momentum back in their favor after Thomas caught a screen pass and ran 34 yards for a first down. A few first down passes later, Sonnichsen ran in a 5 yard touchdown to get the lead back.

After a first down, the aggressive Trojans attempted to convert on 4th and short. The Dawson County defense stifled them, forcing a loss and getting the ball back. 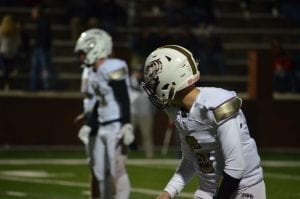 #6 Jaden Gibson lining up before the snap.

With three false starts to open the drive, the Tigers couldn’t get the ball moving and punted the ball to the 32. The very next play, North Hall ran the ball 68 yards for the touchdown, making it a 23-21 game with less than a minute left. Dawson County kneeled the clock out and took the small deficit into the half.

North Hall opened the half aggressively with multiple first down runs, eventually scoring on a 41 yard rush less than 4 minutes into the half.

The Tigers responded with multiple first down passes. When they got to a 4th down, they faked the punt, and Herndon hit Sonnichsen for the first down. Hotlzclaw found Sonnichsen for a 23 yard pass that was nearly intercepted on the next play. After a first down run by Thomas, the Trojans defense stepped up in a big way. They prevented a touchdown for 3 straight plays at the goal line. Being forced to kick a 2 yard field goal, the Tigers faked it again. This time, Herndon’s pass was intercepted at the 1 yard line.

Dawson County couldn’t return the favor and force a safety. After a 16 yard pass to get away from the goal line, the Trojans ended the third quarter with another first down run. The first play of the 4th quarter was a 40 yard touchdown pass to make the score 37-21 in favor of North Hall.

The Tigers weren’t going to give up easily. #15 Isaiah Grindle opened the drive with a 30 yard run. Holtzclaw found receivers #8 Hunter Barron and #6 Jaden Gibson on back to back plays for first downs. Grindle eventually ran it in from 4 yards out, and Sonnichsen ran in the 2 point conversion to make it a 1 possession game.

The Trojans were able to waste a lot of time on their next possession. They converted consecutive 3rd downs on a 34 yard pass and a 16 yard run. They also got first downs from a face mask and another solid run. By the time they kicked the 29 yard field goal, there was only 2:07 left in the game. The possession took 8 minutes and 20 seconds and gave North Hall a 2 possession lead.

North Hall attempted to recover the short kickoff, but the Tigers were able to maintain possession after the ball was fumbled around a few times.

The next play, Holtzclaw hit Sonnichsen for a 70 yard touchdown and ran in the 2 point conversion himself to make the score 40-37 with 1:47 left. 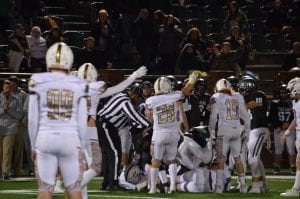 Multiple Tigers declaring the fumble is in their possession.

On the biggest play of the game, the Tigers attempted an onside kick. The ball bounced off the hands of the North Hall hands team and landed in a pile of players. Unfortunately, the Trojans were quick to bounce on it and recovered the onside kick.

With the game in their hands, the Trojans needed a first down. That came on a 35 yard run on second down. They eventually ran out the clock and secured the 40-37 win. The Trojans will have home-field advantage in the first round of the playoffs.