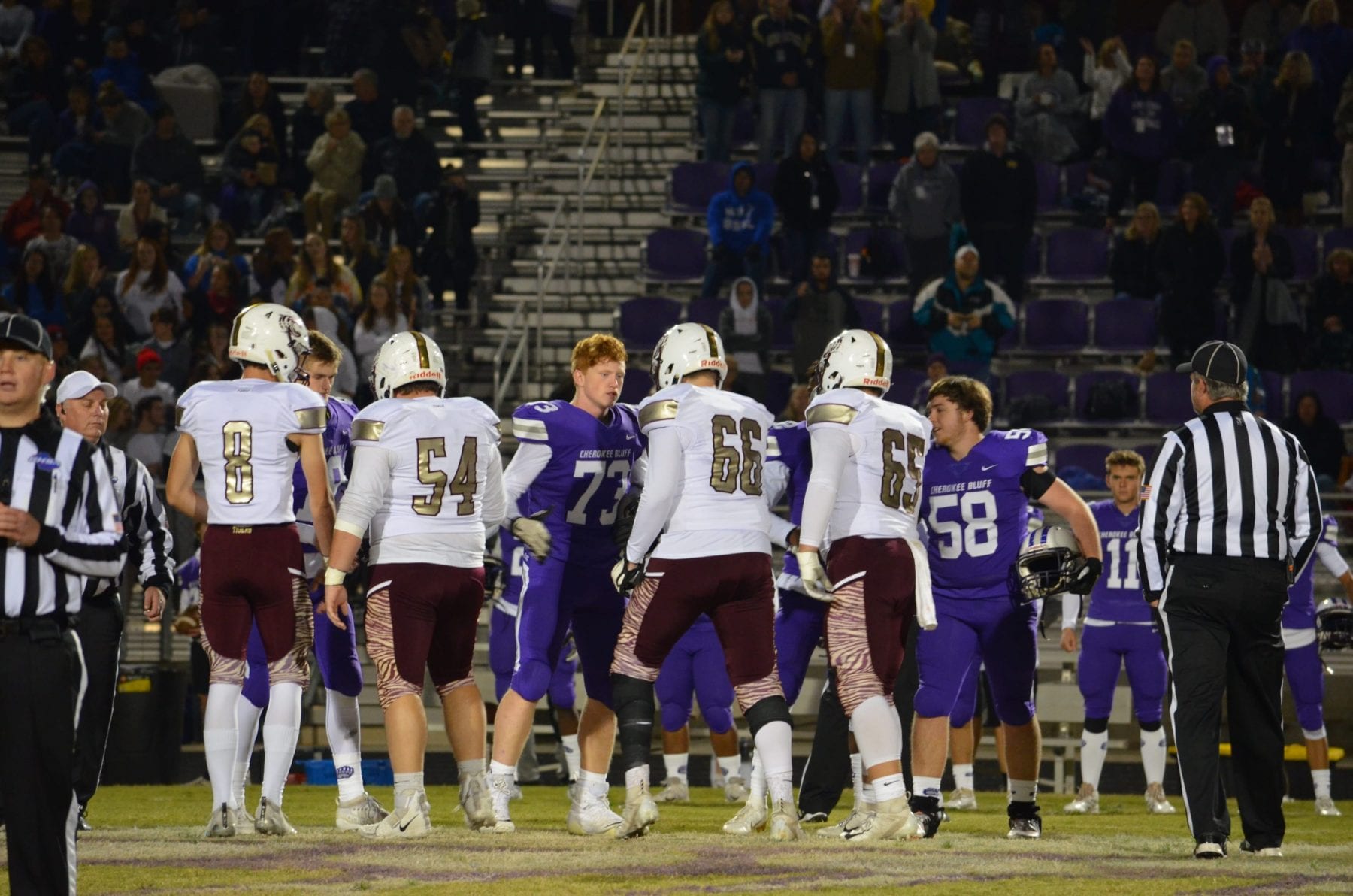 Coming off a huge win last week over Fannin County, the Dawson County Tigers were looking to maintain their momentum heading to the playoffs.

Playing on the road, they did just that.

Cherokee Bluff received the ball to start the game. The Dawson County defense forced a punt that was caught by #1 Dakohta Sonnichsen for a fair catch. The very next play, Sonnichsen caught a 62-yard touchdown pass from #10 Zach Holtzclaw.

The bears were able to move the ball down the field due to multiple penalties by the Tigers. However, they only managed to get a field goal to make the game 7-3 with 5 minutes remaining in the first.

#21 Shawn Thomas returned the kickoff to the 46 yard line to give Dawson County great field position. They capitalized by throwing a 30 yard pass to Sonnichsen before Holtzclaw kept it himself to run in the touchdown from 12 yards out.

On third down of the following possession, #30 D.J. Mitchell had a huge sack to force a punt that went to midfield. Thomas started the drive off with a first down run. Unfortunately, they had to settle for 3 points on a 46 yard field goal from #99 Caleb Bonesteel.

Cherokee Bluff started their next drive from the 6 yard line after a mishap from the return team. After not being able to move the ball, they had to punt quickly. The bears’ punt was a short one to the 35 yard line that was returned 10 yards by Thomas to the 25.

The next play, Holtzclaw fired a 25 yard touchdown strike to #6 Jaden Gibson to make the score 24-3 early in the second.

Cherokee Bluff threw an interception on third down of the next drive, but it was reversed due to a pass interference call. The Tigers were able to force a punt that allowed them to start their next drive from their own 10.

Thomas started the drive with a first down run and followed that with a 79 yard touchdown run.

The teams traded 3 and outs on their next 2 drives to end the first half.

Thomas started off the second half by returning the kickoff to the 30 yard line. He followed that up with a 37 yard run and a 13 yard reception. Sonnichsen ended the drive with a 29 yard touchdown reception to give them a 38-3 lead.

The bears were able to get some momentum with a long return. They were also able to convert on a 4th down, but failed to convert on another 4th down.

Thomas stayed hot with a 30 yard run and another first down run to start the drive. Sonnichsen also had a first down reception before Holtzclaw ran in another score after bobbling the snap.

After another three and out by the bears, #31 Nic Baloga had a first down run, a 61 yard run, and finally punched it in for the touchdown.

Cherokee Bluff got their only touchdown of the game on the back of multiple long runs at the end of the game.

Dawson County ran out the clock to take the 52-9 victory.

The Tigers play next week at North Hall in their final game of the regular season.