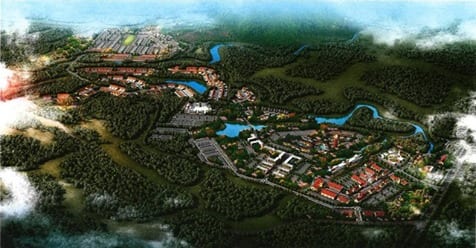 DAWSONVILLE, Ga. — On Sept. 17 at 6 p.m., in the Dawson County Administration Building, the Planning Commission will hear a request it has heard once before — with some modifications.

The owners of a 518-acre parcel of land where the Etowah Village development was proposed have brought back a request to rezone the property for a mixed use development. The property is bordered on the east by Ga. 400 and Lumpkin Campground Road and on the West by the Etowah River.

According to the application, the development would include 338,000 square feet of retail and service space, with second- and third-floor residential spaces, 243,200 square feet of Class A office space with buildings up to ten stories; a hotel with convention center; 770 units of multi-family residences; 254 units of single-family attached home residences; a 350-unit continuing care retirement community with both independent and assisted living; 265 single-family homes dividing into three separate neighborhoods; 156 acres of parks and green spaces and a site dedicated to a future fire station.

The application states: “The site is the former location of the defunct Southern Catholic College. The existing zoning, based upon the Southern Catholic Master Plan, permits a variety of uses of which most are mirrored within the proposed development plans: Retail, Office, Multi-Family and Single-Family Residences. The applicant wishes to modify the arrangement of these uses and add a few additional parcels to create a viable alternative use for this tract that will become an asset to Dawson County.”

One important difference between this application and the earlier one is that it does not include anything west of the Etowah River which, opponents of the development have pointed out, is the site of a Native American burial ground.

Commissioner Chris Gaines said, “We made it very clear we are not going to allow anything west of the river. It there is something in this application that does not adhere to it we need to address it and get it cleaned up.”

Gaines also said he believes this will give the county greater control over how the pods fit better and look better.