Johnson said the victim made a rather “frantic” call to 911 at approximately 7:36 p.m. before the line went blank. 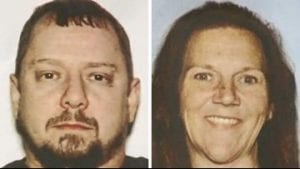 Jeremy Gibson (left) has been identified as the person who shot his wife Amy Alexandria Gibson Monday.

Gibson was fleeing from her husband and apparently drove to the fire station seeking a safe haven. Her husband reportedly followed her in a second vehicle and before she could exit the vehicle, she was shot several times and died at the scene. Her two children, ages 8 and 5 were in her vehicle at the time, but were unharmed.

After the shooting, Jeremy Gibson surrendered to firefighters who held him until deputies arrived and took him into custody.

Johnson said there has been a “lengthy” history of domestic violence between the couple, but he declined to provide details.

Fire and Emergency Services Chief Danny Thompson said one firefighter and his family witnessed the shooting.

“One of the firefighters was confronted by a female that requested help. He just assumed like many people who arrive at a fire station to report a fire or medical emergency. He stepped back to notify his partner then stepped back out when the shooting occurred.”

Thompson declined to name the firefighter who witnessed the shooting out of respect for him and his family. “We want to make sure they get the necessary mental help to take care of them. Even though we’re professionals, it is still a tragic event. It even weighs heavy on the seasoned veterans.”

Thompson said the firefighter, his wife, their two children, ages 1 and 3 actually witnessed the shooting. He also pointed out that their lives were in immediate danger. “Front and center in a matter of seconds, it was their lives, his family’s lives they were looking after. They took the necessary actions and precautions to do exactly that.”

The victim’s children were turned over to the Department of Family and Children’s Services.

“Certainly there will be a murder charge, some firearms charges, cruelty to children because of the witnessing of this event by the children.”

The Georgia Bureau of Investigation was involved in processing the crime scene.