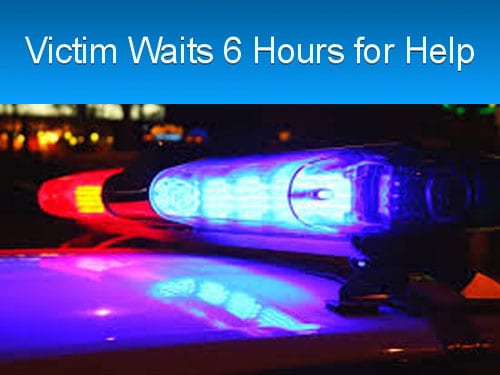 DAWSONVILLE, Ga. — The victim of a single-vehicle automobile accident last month waited more than six hours for help to arrive from the Dawson County Sheriff’s Office because Sgt. Larry Busher feared the 911 call might be an ambush.

Christopher Cody Green was driving a Chevy Trailblazer when it overturned at the approach trail on Nimblewill Gap just before midnight on May 19.

Bill Skinner who was camping in the area found Green and attempted to contact 911 but could not get a signal on his cell phone. But Skinner, a ham radio operator, was able to make contact with Raul Perez a fellow ham radio operator who relayed the information to Lumpkin County Sheriff’s Office. Lumpkin County then reported the accident to Dawson County at 12:24 a.m.

Fortunately, Green was not injured when his vehicle overturned because it would be more than six more hours before anyone from the Dawson County Sheriff’s office arrived on the scene. Green was able to exit the vehicle on his own.

911 operator Miki Mullis attempted to dispatch Busher. But the sergeant refused to go.

(Language Warning in the Dispatch video above)

The following is the transcript of the conversation between Mullis and Busher (video is the audio of this call):

BUSHER: “I’m going to get shot. You know that right.”

MULLIS: (Jokingly) “Have you taken medicine tonight? Busher, you’re not going to get shot. This is not an ambush. This is a wreck. He needs an accident report.”

BUSHER: “For a driver we don’t even know who he is?”

MULLIS: “Busher, we go to accidents all the time when we don’t know their ,27.”

BUSHER: “Not in the middle of nowhere. Think about it.”

MULLIS: “Busher, you’re fine. He’s not going to shoot you. This is a third-party caller.”

BUSHER: “We’ve made no contact with a third-party caller. The only person we’re talking to is Bill.”

MULLIS: “Busher you’re going to be just fine. You’re fine. Where are you now?”

BUSHER: “I’m not (expletive deleted) going anywhere. Randy Harkness is going with me.” (NOTE: Harkness was off duty at the time).

BUSHER: I’m at Nimblewill Church Road and Nimblewill Gap Road. But you’re not telling him I’m on my way.”

BUSHER: “I’m sorry. Something about this isn’t right.

BUSHER: If I’m wrong, I’m wrong. But if I’m right, it might just save my damn life.”

BUSHER: “Something about this is just weird.”

BUSHER: “I mean who is Bill? Why is Bill up there? Where is Bill from? Why can’t Bill drive him down?”

BUSHER: “Could be we’ve got some hermit living up on the mountain named Bill trying to lure a (expletive deleted) cop up there.”

MULLIS: “I don’t think that is the case. I think maybe you’re over reacting just a little bit.”

MULLIS: “OK. Well, you be careful. We’ll wait for Randy. Are you going to be up there before shift change?”

BUSHER: “I don’t know. I’ll get there when I get there. If he’s injured, I’m getting there, but I want to make sure.”

MULLIS: “If so, that is going to be a heck of a lawsuit.”

BUSHER: “We don’t have the capability of getting there.”

BUSHER: “According to Randy (Harkness) that road is in Gilmer.

BUSHER: “This whole ‘he might be injured thing’ is (expletive deleted) just to make sure we show up.”

BUSHER: “Something ain’t right with this.”

Skinner said he stayed with the victim for six hours. “We were in shock that it took so long to get there,” he said.  “We were told it would take a 4-wheel drive vehicle to get there and they had to go back and get one.”

Fetch Your News reached out to Dawson County Sheriff Jeff Johnson and Christopher Green, but neither returned our call.

Sources inside the sheriff’s office say Busher has not been disciplined.