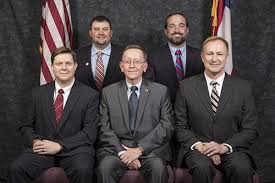 DAWSONVILLE, Ga. – Dawsonville residents packed the city hall meeting room during Monday’s City Council meeting to voice their opposition to a proposed development that would add 172 new residences on a 38.58 acre tract at 592 Hwy. 53 West.

The developer, Ensite Civil Consulting, LLC, has asked for the property to be rezoned from R-3 to Residential Planned Community to be marketed to senior citizens. However, before the meeting, Ensite asked for and received a postponement until the April 22 meeting.

Council did go ahead with the public hearing and seven area residents marched to the podium to explain why they don’t believe the development is in the best interests of the city. No one spoke in favor of the project.

Dava Hudgins spoke first to say the area is already heavily congested. “Add in this many more units they are requesting and this is going to be a dangerous intersection,” she said. “I don’t want another child in this county to wreck or be injured or killed because of poor planning where this road is concerned.”

Jeff Chastain, whose property is adjacent to the proposed development, expressed concern about an underground stream that crosses the property and flows into a branch which then feeds into Shoal Creek. Chastain said the runoff will damage the water quality and threaten endangered species.

“There is no way you can put 170 homes with two or three vehicles per home and keep the oil and gas and everything you’re going to get from that out of the waterway,” he said. “I don’t see how that is environmentally possible. This is beyond ridiculous. That is some of the cleanest water you will find around here.”

The planning commission unanimously recommended that council deny the request to rezone the property.

Councilman Mark French said, “I believe we should uphold the planning commission’s decision.”

He pointed out that if the residents are required to be 55-and older in a few years, many of the residents would be eligible for a senior tax exemption and sales tax generated by the development would be insufficient to pay for the additional services the city would have to provide. “I’m just concerned we would not be able to do that.”

While some opponents pointed out that the developer could not legally limit the sale of the units to non-senior citizens, City Attorney Dana Miles explained that under federal law, the City could do so.

“Under the Housing for Older Persons Act, there can be a requirement that (council) can put in by ordinance as a stipulation if you see fit to rezone this property,” he said. “It allows (government) to discriminate in the sale of housing units to people under 55. At least 80 percent of the residences must be owned by and lived in by someone 55 and older.”