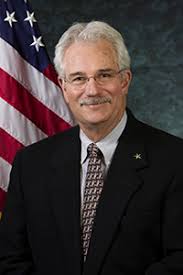 The GMRC is a sub state district created by local governments to promote proper development of human, natural, physical, social and economic resources in 13 counties (Banks, Dawson, Forsyth, Franklin, Habersham, Hall, Hart, Lumpkin, Rabun, Stephens, Towns, Union, and White) as well as 51 cities. Being chosen Appointed Official of the Year in a group of public servants of that size is a very big deal.

In presenting the award, GMRC Executive Director Heather Feldman said, “This year’s Appointed Official of the Year award celebrates an individual who is dedicated to serving the public and who has shown passion and commitment not only to the county for which they serve, but the GMRC Council and staff as well. He has one of the most uplifting, caring, and cooperative attitudes in the public service realm.”

She added, “He is a hard worker who understands the value and importance of community and his compassion, stellar leadership abilities, and willingness to help others is to be commended. He is a man of true integrity and this is amplified by his desire and passion to help people. His policies and initiatives exemplify and demonstrate the values and ethics held so esteemed within the local government profession.”

In a phone interview Monday, Headley said, “It is an extreme honor to have been recognized and selected among such other dedicated and supportive GMRC applicants. I can’t say enough about the great work they do for Dawson County and the member counties it serves. I’m moved the team that selected above the other candidates collectively felt that mine and Dawson County’s commitment rose to this level. The GMRC is the true recipients of this award for the outstanding service it provides. It is with great respect and admiration for their organization that I accept this award on behalf of Dawson County.”

County Commission Chairman Billy Thurmond said, “David is very deserving of the award. He does a good job representing the citizens of Dawson County. He has also worked well with the GMRC on several projects, including the comprehensive plan.”

District 2 Commissioner Chris Gaines said, “We’re lucky to have him. The drive, dedication and energy he has put into his role as county manager has been a good thing for Dawson County.”