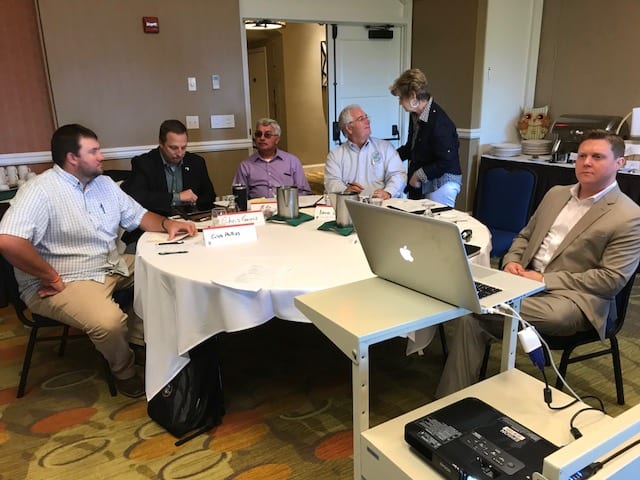 DAWSON COUNTY, Ga. – City and county officials gathered for a day-long retreat at beautiful Amicalola Falls State Park and Lodge Friday to explore ways the two governments – that don’t always see eye-to-eye on issues – might be able to work together for the benefit of all residents.

Facilitator Langford Holbrook of the UGA Institute of Government led the joint strategic planning session while leaders discussed broad issues such as goals, a vision for the future and areas of possible collaboration between the two governments. Then they narrowed the discussion to more specific issues like impact fees, the importance of a truck route around the city and a potential local road maintenance and improvement tax.

The one goal that was mentioned more than any other was improved communication between the two governments and with the citizens they serve.

The session had just begun when Holbrook asked the leaders to identify important goals. Commission Chairman Billy Thurmond, who cited improved communication throughout his 2016 campaign, was first to answer.

“We should strive to improve communications between ourselves and with the general public,” Thurmond said.

City officials did take a major step toward improving communications with the public earlier this year by streaming video of their city council meetings onto the website. Citizens who cannot attend meetings in person can now view them at their leisure.

The county is also taking steps to provide more information. Last month, Headley requested the position of public information officer (PIO) be added to the 2019 budget. So far, the PIO position has not been added to the budget, but Gaines, Nix and Fausett have all said they support the initiative.

In assessing the current relationship between the two governments, Eason cited a need for more “understanding of each other’s goals and willingness to work together to accomplish them.”

Headley said the “exchange of information has improved.” And, Fausett said she senses there is “more spirit of cooperation than ever before.”

City Councilman Stephen Tolson surprised nearly everyone in the room when he said there are more than 110 homeless families in the county that need help. Tolson said finding jobs is not the problem. Many of the homeless, he said, have jobs. The problem is finding affordable housing for people in low-paying jobs.

There was also a discussion other issues that lend themselves to collaboration between the two governments – a local transportation and road improvement tax, downtown revitalization, a truck route around the city and the future of the airport.

Headley pointed out that a local transportation and road improvement tax collected over a five-year period could generate up to $50 million, all of which could be used to fund only local roads and bridges. He added there is a possibility the Georgia Department of Transportation would match whatever amount the tax generates.

City officials said rerouting truck traffic around the city is the key to revitalizing the downtown area.

Eason said more than 100 trucks pass City Hall every hour. “We have to get these trucks out of town,” he said. “GDOT says it will not restrict truck traffic unless we have a truck route. We have to do that before we can revitalize the city.”