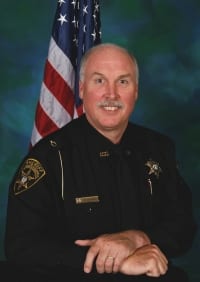 DAWSONVILLE, Ga. – Veteran law enforcement officer Billy Carlisle announced today that he will run for the Dawson County Board of Commissioners this summer.

He will run for the District 3 seat. Dist. 3 Commissioner Jimmy Hamby has announced he will not seek a third term next year.

Carlisle, 56, began his law enforcement career as a patrol officer in 1987. During his time as sheriff, he was able to grow the department from 30 employees to 115. He was also instrumental in helping to bring several programs into the county, working with children. Through his leadership, many programs were developed for the senior citizens as well as the adults of Dawson County. He retired in December 2016 after 20 years as sheriff.

Asked why he wanted to get back into government after just one year in retirement, he said, “I still have a desire to serve the community and our citizens. I’ve always enjoyed helping people.”

Carlisle said the county is in good shape right now.

Carlisle said the relationship between the sheriff’s office and county government is not good right now.

“Both sides need to understand it is a give and take relationship, and they need to work together for the benefit of the citizens,” Carlisle added.

The dispute between Dawson County and Sheriff Jeff Johnson heads to Superior Court on Tuesday, Jan. 30. Johnson claims the $8,273,080 budget approved by the Board of Commissioners is not adequate for him to perform his duties.

However, Carlisle said it is more expensive to run the sheriff’s office without using the county’s Purchasing Department. “The county has a very experienced purchasing office already in place. If the sheriff won’t use that department, he has to hire his own people to do that job and that is just an added expense.”

Carlisle said during his term as sheriff, he relied on the county’s Purchasing Department and procedures.

Qualifying for elected offices will take place in March with the election set for July.

Carlisle and his wife, Cathy, are members of Lighthouse Baptist Church where he is a member of the church’s security team and she serves in the children’s nursery.