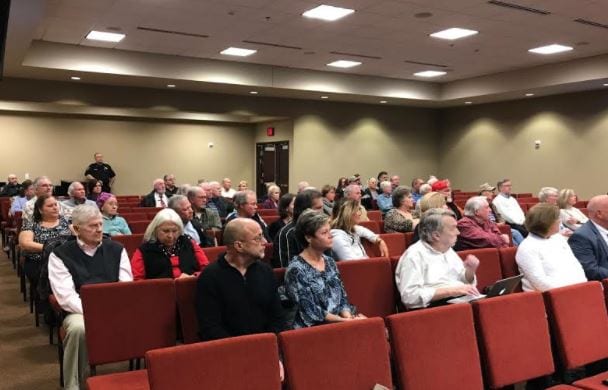 DAWSONVILLE, Ga. – Nearly one year after the Dawson County Board of Commissioners turned thumbs down on Dawson Forest Holdings plans to build 177 single-family homes and 95 townhomes near Hwy. 53 and Elliott Road, the plan resurfaced at Tuesday’s Planning Commission meeting.

It turned out to be no more popular in 2017 than it was in 2016. Dozens of area residents braved evening thunderstorms to attend the meeting and many stood up to voice their opposition to the plan. When the Planning Commission voted unanimously to recommend denial on two separate applications for a variance, the opponents applauded the commission’s decision.

Attorney Joshua Scoggins, who represents Dawson Forest Holdings, said there had been some “legal deficiencies” with the application last year and that a Superior Court judge had remanded it back to the county so those could be corrected. “That’s the reason we are coming back before you,” he said.

There were two variances applications. The first called for 15.828 acres to be rezoned from residential agriculture (RA) to residential multi-family (RMF) to build a 95-unit townhome community. The second requested that 59.497 acres be rezoned from RA to RMF to build 177 single-family homes. 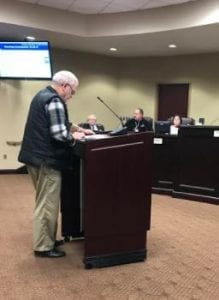 Hugh Stowers asked who will pay for the added services the development will require. “Who will pay for the added cost of law enforcement?” he asked. “Dawson County has increased the Sheriff’s Office budget more than any other department, and I’m sure you know the closer you put people together, the more crime there is.  This will reduce our quality of life and drive our property taxes higher than we have ever dreamed.”

Tony Passarello voiced concerns about the added traffic along Hwy. 53, a major artery between Dawson and Hall counties.

“To put this all in perspective, by 2020, the area buildup will include a 2 to 9 percent increase in peak traffic load along Hwy. 53,” he said. “We will have the addition of 300 apartments being built behind Dawson Forest Publix and the development of a 67-acre tract along Dawson Forest Road these same developers had already sold. The fully-opened Publix Shopping Center and Kroger Shopping Center would, of course, put more pressure on the intersection of Hwy. 53 and Dawson Forest Road.”

Passarello added that approval of the variance would create a density that will “have a serious effect on the safety of existing and future property owners in the area.

The proposal now goes to the Board of Commissioners for a final decision.