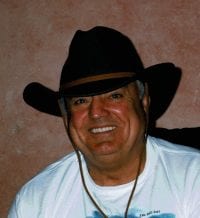 John R. “Johnny” Waddell, Sr., of Dawsonville passed away peacefully in the early morning hours of August 31, 2017 after a long battle with alzheimers. He was 80 years old.

Born January 27, 1937 to the late John E. Waddell and Hazel M. (Jones), he was the eldest of three children. He grew up with his sister, Sharon and his brother, Gary in Marshalltown, Iowa.

Johnny served in the U.S. Air Force 317th Fighter Interceptor Squadron and the 325th Consolidated Aircraft Maintenance Squadron. He was honored with a National Defense Service Medal, Good Conduct Medal and an Air Force Outstanding Unit Award. His love of flying continued throughout his lifetime. In 1958 he married the mother of his three children, Frances, who he lovingly called Beulah. They divorced in 1973, and he never remarried, but enjoyed life on the farm he called DunRoven Acres, where he lived happily ever after with his tractor.

He was a certified master mechanic. Starting out at Chamblee Carburetor, then Plaza Pontiac, he worked for and then owned his own business, Ron’s Automotive. Most recently he was a valued employee and team member of Grimes Automotive. Johnny, also known as “Big John”, is well known and respected in the racing community as the Crew Chief of the Bruce Brantley Racing Team, inducted into the Georgia Racing Hall of Fame in 2007.

The family is planning a memorial gathering of close friends and family at a later date.

Condolences may be expressed at www.beardenfuneralhome.com.