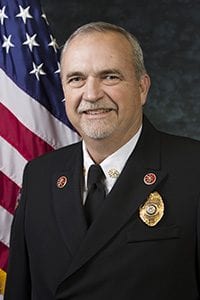 DAWSONVILLE, Ga. – A truck hauling insecticide was involved in a two-vehicle crash Friday afternoon at approximately 5 p.m. resulting in a hazardous material spill on Hwy. 53 East near the Etowah River.

A 300-gallon container came loose from the truck that was traveling downhill and struck another vehicle. Dawson County Emergency Services Deputy Chief Tim Satterfield said no injuries were reported.

Satterfield said about 30 gallons of the arsenic-based insecticide spilled onto the roadway. “It happened a couple of hundred yards away from the river and was completely contained on the road. Nothing leaked onto the roadside or into the waterway,” he said.

Satterfield credited the county’s Public Works Department for responding quickly and spreading dirt onto the spill. “They were there within 15 minutes and had a truckload of dirt ready to go.”

“We contacted the Environmental Protection Division (EPD) and they advised that a clay-based soil was best to use in the cleanup.”

Both lanes of Hwy. 53 were closed for nearly four hours.