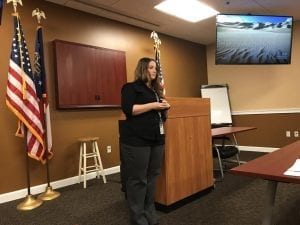 The Academy’s purpose is to promote understanding and cooperation between citizens and the dedicated men and women of the Dawson County Sheriff’s Office. It is designed to give citizens a first-hand knowledge of law enforcement operations.

Previous meetings included a basic introduction to U.S. Constitutional law and a tour of the Dawson County Detention Center. Tuesday’s class included presentations by E911 Director Aleisha Rucker-Wright, Captain Matt Hester who heads up the Uniform Patrol Operations and K9 handlers Sgt. Jessica Kraft and Cpl. Zack Smith. Citizens who participate in the class are also offered an opportunity to accompany an officer on patrol.

Rucker-Wright explained that her department is allocated 12 positions that include two communications supervisors and eight communications officers. The officers work rotating 12-hour shifts from 6 a.m. until 6 p.m. and 6 p.m. until 6 a.m. Supervisors work rotating shifts as well, however, supervisors will work swing shifts once the department is fully staffed.  Supervisor swing shifts are subject to change to accommodate call volume, staffing needs, etc. The 911 Center processed 101,213 calls during 2016.  On average, the center process approximately 275 calls per day, including officer initiated activity.

Sgt. Kraft introduced her canine partner Kimbo, a Belgian Malinois, that specializes in apprehension, article searches, controlled substance detection and tracking. When Cpl Smith donned his protective gear and played the role of a suspect, Kimbo attacked with the sound and impact of an NFL middle linebacker.

Participants in the Academy are given an opportunity to ride along with a patrol deputy. 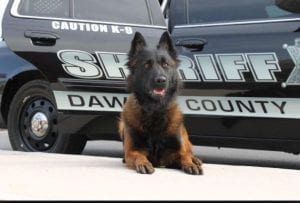 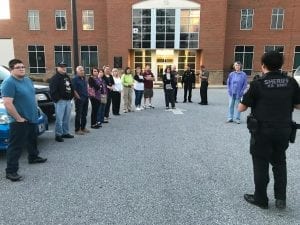