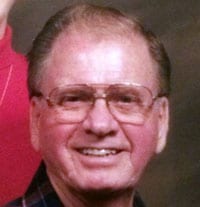 Born February 14, 1923 to the late Coker and Willie Mae Lambert in Atlanta, he had been a resident of Dawson County since 2005 coming from Dekalb County. A U.S. Army veteran, Mr. Lambert served during World War II and participated in the Normandy Landings on Omaha Beach and The Battle of the Bulge where he was wounded and received a Purple Heart. After his military service he worked as a commercial electrician in many of the buildings in Atlanta where he retired after 39 years of service. During retirement he enjoyed woodworking, building and restoring furniture. An active member of North Lanier Baptist Church, he was a loving and devoted husband, father, and grandfather. He was also preceded in death by his first wife, Frances Lambert; son and daughter in law, Ronnie and Doll Lambert; 7 brothers and sisters.

Funeral services will be held Tuesday April 25, 2017 at 11 AM at Bearden Funeral Home Chapel. Rev. John Lay will officiate. Interment will follow at 2 PM at Dawn Memorial Park in Decatur, GA.

The family will receive friends on Monday from 6 PM until 8PM at the funeral home.
In lieu of flowers donations may be made in memory of Mr. Lambert to your favorite charity.
Condolences may be expressed at www.beardenfuneralhome.com.
Bearden Funeral Home, Dawsonville, GA.