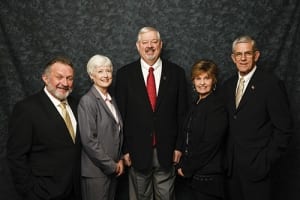 DAWSONVILLE, Ga. — Setting the 2016 millage rate and the State Route 53 Overlay District Development and Design bids were among the key topics discussed at the Dawson County Board of Commissioners work session Thursday.

Commissioners will vote on those and other issues at the regular meeting scheduled for Thursday, July 21.

Commission Chairman Mike Berg recommended a roll back from the current millage rate of 8.138 mils to 7.8. The chairman said he expects to receive additional revenue of about $600,000 to $650,000 from Georgia Emergency Management Agency (GEMA) and from sale taxes generated by the new development along the 400 corridor.

Commissioner James Hamby asked, “What if we roll back to 7.8 and the economy goes down? Where does that leave us?”

Berg answered, “The School Board did the same thing and told the citizens if we need more later then we will have to ask for it. But we’ve worked very hard to develop Ga. 400 so we could reduce property taxes for the citizens. My hope is that you will approve the 7.8 mils.”

Dawson County officials traditionally set a millage rate before the budget is approved.

Chief Tax Appraiser Kurt Tangel has requested adding the position of Tax Appraiser III immediately. The cost this year would be about $25,000 for the remaining six months of the year and approximately $51,000 for 2017.

Tangel explained that the passage of House Bill 202 in 2015 added significant responsibilities with potential consequences to the Assessors office making it a much more formal process than it was just five years ago.

Planning and Development Director Rachel Burton presented the State Route 53 Overlay District Development and Design bids. Burton said there is currently a GA 400 Corridor Guidelines but they do not extend down SR 53. This multi-year project would cover SR 53 from Perimeter Road to the Forsyth County line.

After evaluating the bids, staff recommended awarding the contract to B+C Studios from Atlanta, GA, in the amount of $46,000 over a three-year period.