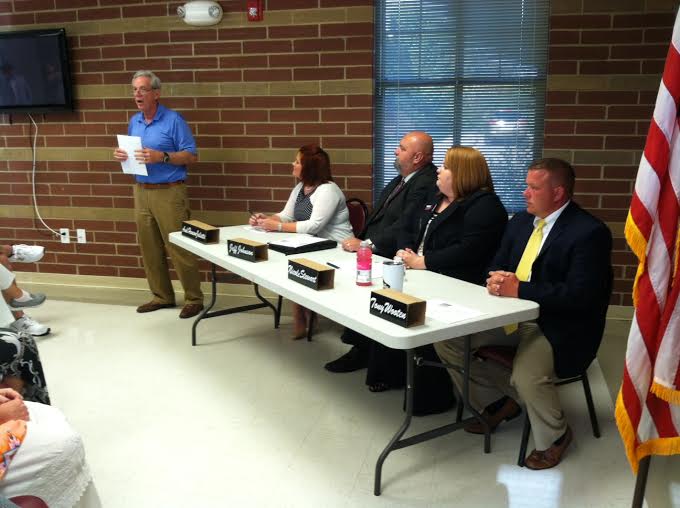 DAWSONVILLE, Ga. — A standing-room-only crowd got one last chance to evaluate the candidates for Dawson County Sheriff and Tax Commissioner Tuesday in the Meeting Room of Fire Station No.2 on Dawsonville Highway.

Henson-Juliette stressed her experience in handling multi-million dollar budgets while Stewart placed the emphasis on her customer service experience and community involvement.

Henson-Juliette is a former analyst for a Department of Defense contractor and the FBI and has managed budgets in excess of $50 million. She is a graduate of Dawson County High School and North Georgia College and State University.

“A lack of experience in the Tax Commissioner’s Office could be detrimental to taxpayers since 75 percent of the county’s budget comes from sales tax,” she said. “I’m the only candidate with experience managing budgets like that.”
Stewart said she has solid management experience. “I have effectively managed 8-10 people and have helped teach many small businesses how to manage a budget.”

She is a former banker with experience in the loan department. She is also an honors graduate of Dawson County High School and North Georgia College and State University who recently earned her Masters degree at Brenau University. Active in many community affairs, she was named Dawson County’s Outstanding Citizen in 2015.

The sheriff candidates did find some areas of agreement, for example no-knock warrants. Both agreed they were sometimes necessary for the safety of officers. They also agreed the county needs a strict policy to restrict high-speed chases.

But the tension began when Johnson implied that Wooten had made promises to deputies who publicly endorsed him in a half-page ad that ran in the local newspaper this week.

“I can say a lot of promises had to be made,” Johnson said. “They’re doing all they can to get their man elected.”

Candidates were given an opportunity to rebut their opponent’s comments and both men took full advantage.

Wooten bristled at Johnson’s remark, “They haven’t been promised a thing.”

When Johnson pointed out that he had more years of experience than Wooten, Wooten responded with “All the candidates in the race had experience. It’s not the number of years experience that makes you a leader. I’ve led five of the six divisions in the sheriff’s office.”

Early voting in both races will continue through Friday, July 22. Election day will be July 26.