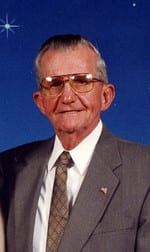 Harold G. Hardin, Sr., 91, of Cumming passed away Wednesday October 14, 2015 at Gracemont Assisted Living following a period of declining health.
Born January 2, 1924 in Atlanta to the late William L. Sr. and Kathryn Hardin, he had lived in Forsyth County since 2005 having moved from Daytona Beach Shores, Florida. A 1953 he earned a degree in architectural engineering from Georgia Tech. Mr. Hardin owned Hardin Brothers Construction Company, after which he was a chief engineer with the State of Georgia for 20 years, retiring in 1989. He was a U. S. Navy veteran of WW II where he served in the European Theater as a Gunnery Officer aboard the U.S.S. Saturn. He was a member of the Gideons since 1952 and was a member of Lighthouse Baptist Church. Harold was also preceded in death by his wife of 65 years, Renee Hardin, four brothers and a sister.
Surviving are his children, Joy and Martin Jones, Peachtree City, Janet and Bill Manke, Acworth, Hal and Shelly Hardin, Cumming; grandchildren, Todd Jones, Grayson, Brian Jones, LaGrange; and five great grandchildren.
Funeral services will be held Saturday October 17, 2015 at 11 o’clock at Bearden Funeral Home Chapel. Dr. Charles Blackstock and Rev. Todd Jones will officiate. Interment will follow in Sawnee View Gardens.
The family will receive friends Friday from 5 until 8 at the funeral home.
Condolences may be expressed at www.beardenfuneralhome.com.