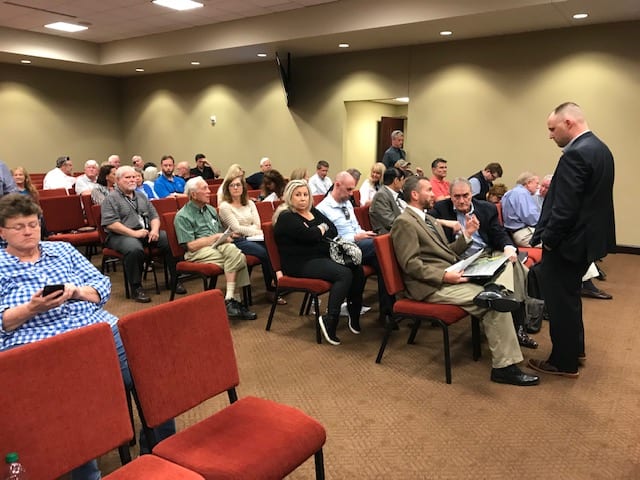 DAWSONVILLE Ga. – The Dawson County Planning Commission voted 3-2 Tuesday to recommend the Board of Commissioners deny the controversial Dawson Village Partners plan to build a Master Planned Village on 777 acres starting at Lumpkin Campground Road and Ga. 400, stretching to Etowah River Road then across the Etowah River.

The Government Center Assembly room was packed with residents, mostly opposed the development. When the vote was announced, many applauded and some shouted “thank you” to the commissioners. But the recommendation is non-binding. County Commissioners will make the final decision next month.

Shaun Adams, an attorney for the developer, outlined the project, which he said would include 250 acres of green space, a five-star hotel with approximately 300 rooms,  a performing arts center for concerts, approximately 300,000 square feet of retail/restaurant space, 200,000 square feet of office space, land to build a fire station, a 40-acre park with canoe launch on the Etowah River, a continuous care retirement community with an assisted living and nursing center with about 450 beds and a Chinese cultural arts center.

The plan originally called for a 2,700 residential units but that has since been reduced to 2,175 units.

The development would be built in five phases and would take between 10 and 15 years to complete.

Dooley expressed concern about the project’s density and added it would risk, “turning us into our neighbors to the south.”

Hornsey said, “It might be a little too ambitious for us.”

More than two dozen residents rose to express their views regarding the project. Nineteen were opposed.

Tony Passarello was one of only six who spoke in favor of the development. “To me it represents a management vehicle for growth,” he said. “It is a larger development and therefore you can manage it. Based on the restrictions and the planning and some of the stipulations that have been discussed tonight, the scale is large enough for us to have some predictability as long as financing and their demographics work out.

He added that the development is consistent with controlled growth metered over the next 10 years and that it is the type of development that citizens indicated they wanted in a comprehensive plan survey conducted last year.

Johnny Burt said, “I don’t have a problem with people making money. The problem I do have is when people come into the county, make their money and leave us with the problems they’ve left behind.”