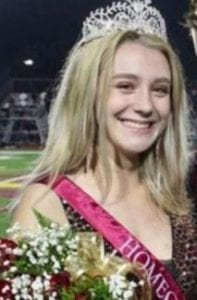 Sheer was a senior at Dawson County High School and the 2017 Homecoming Queen.

A Georgia State Patrol incident report indicated she was driving a 2002 Honda CR-V west on Hwy. 53 shortly before 8 a.m. At the same time, a 2017 Peterbilt tractor trailer, driven by Edwin Thomas Kincannon Jr., was traveling east on Hwy. 53.

Sheer failed to negotiate the curve in the road, over-corrected to the left and lost control of her vehicle. The vehicle then began to rotate counterclockwise and crossed the center line. Sheer’s vehicle entered the eastbound lane of Hwy. 53 and was struck in the passenger side of the vehicle by the front of the tractor trailer.

Kincannon, 42, of Cartersville, was not injured in the crash. Both drivers were wearing their seat belts.

The Dawson County School Board observed a moment of silence in memory of Sheer at Monday’s meeting. School Superintendent Dr. Damon Gibbs said the school’s crisis response team is available to meet with students who need help to cope with the tragedy, and he asked those in attendance to remember Sheer family members in their prayers.